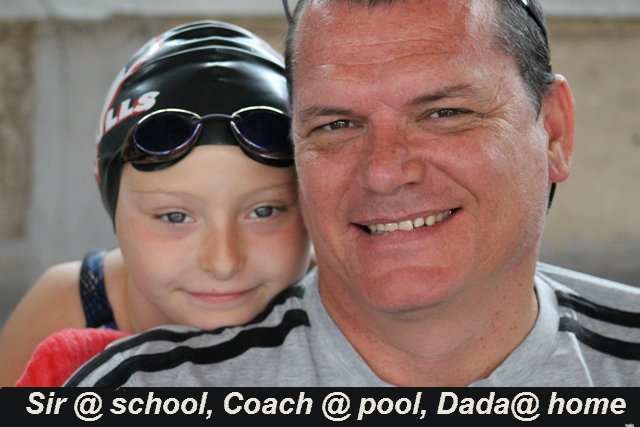 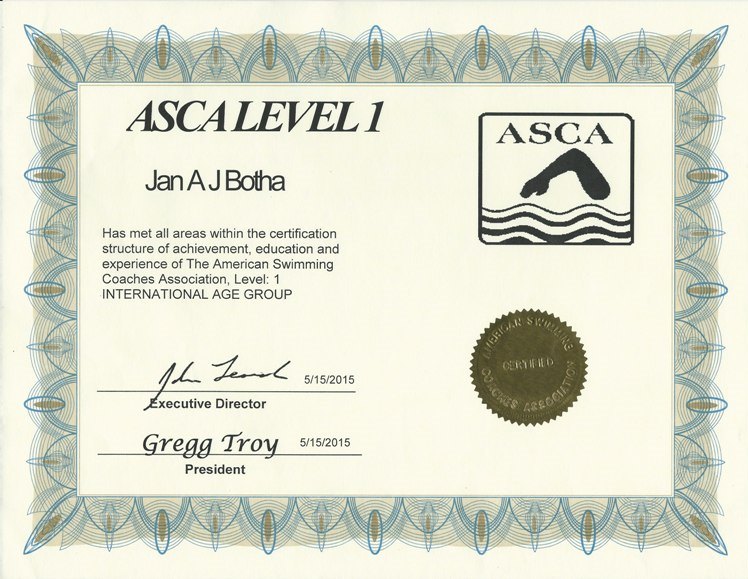 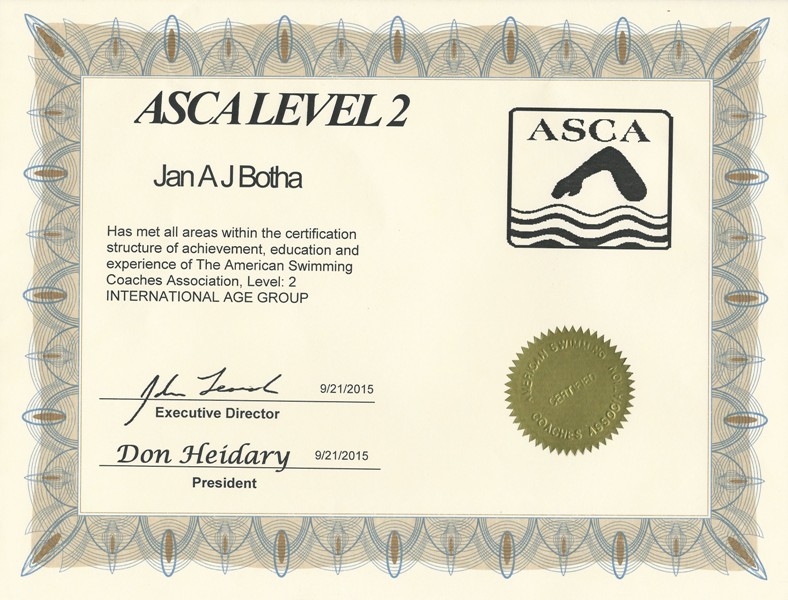 2013-2017: Monica does not swim with a squad as our town is too far from the club she swims for (North Coast Dolphins Swim Team).  Mica trains alone at a local gym, after homeschooling up to end April 2017.  Coach Jan completes the American Coaches Swimming Association level 1 and 2 courses in 2015. ACSA Level 3 follows in January 2016.  Jan was also a Provincial swimmer (backstroker) in the 1980’s.

1980: Jan swims at the Penguin swimming club in Waverley, Pretoria, South Africa. Coach Karel van Greuning is the head coach and they train at the Voorpos Primary school’s 25-meter swimming pool. In 1984, Jan receives Provincial colors for backstroke and swims for the Northern Transvaal swimming team.

Jan competes at the SASOL championships from 1984-1988, representing Northern Transvaal.

Other sports include athletics (high jump) and playing Rugby.  At the 1987 Inter-school athletic event, Jan places first in the high jump clearing a height of 1,95 meters. 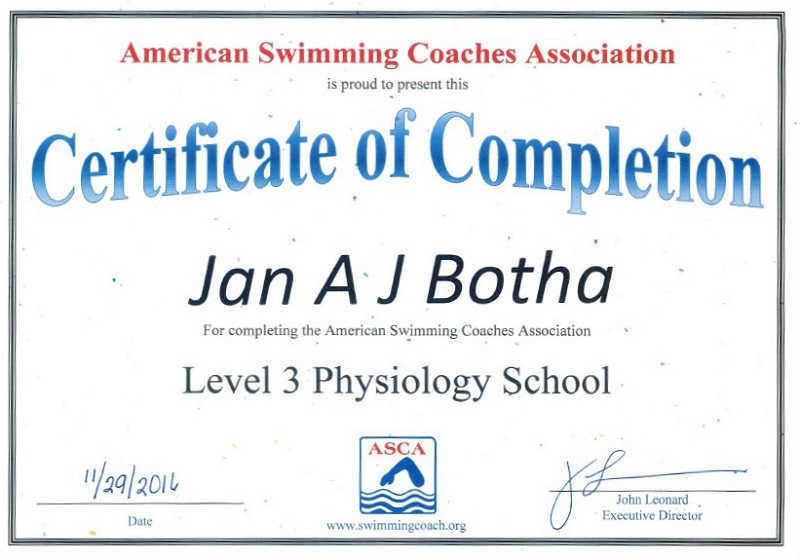 2013: Monica is five going on six and our pediatrician, Dr. John advises that it would be good for Monica to find a way to strengthen her lungs.  Swimming is a good option. 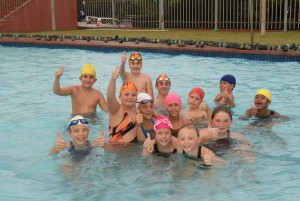 We join Toti Swim Club under head coach Esterhuizen in January 2013.  Dad teaches Monica strokes in our 7-meter home pool.  We, however, find that the home pool is too small and Monica needs a bigger pool to train in.

The club trains at a local primary school.  The pool is equipped with heaters which makes pre-season training possible.

September 2013: Monica swims her first fun gala in September and wins the freestyle (to our surprise).

In December 2013, due to ill health, coach Esterhuizen retires.  The principal of the school announces that swimming at the school pool will only be available to learners during the 2014 season.  Monica is homeschooled and we lose access to the training pool.

In tears about the possibility of not being able to swim, Monica begs us “not to take her swimming away”.

We decide that we will do whatever it takes to keep Mica in the pool and keep her swimming as we already notice the positive effect swimming has on her struggles with asthma.  Swimming in salt water is a perfect solution for any asthmatic.  We start training at the saltwater pool at Amanzimtoti’s main beach.  The lifesavers use the pool for training.

Finding a coach, a pool, and a club 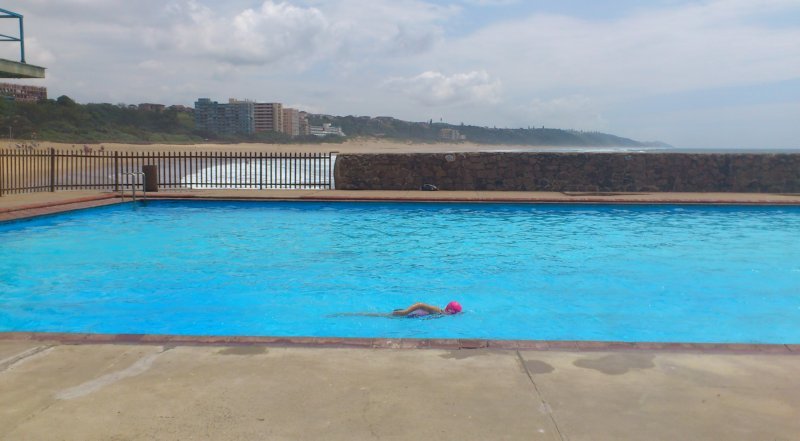 Monica training on her own at the age of 6 at the Amanzimtoti 35-meter swimming pool.

July 2014: we join a local gym with a heated pool as it is winter and the Municipality empties the saltwater pool for repairs.  The water is becoming too cold to swim in despite using Vaseline to keep Monica warmer.

The gym has a rule that states:  “Swimmers under the age of 14 are not allowed to train without adult supervision. ” We also swim and train outside peak hours as it is the only time where the pool is not booked.  Monica trains between 10:00 to 12:00 weekdays.

We now have a pool but no club and no coach.  Our paths cross with an experienced coach from Johannesburg.  He travels down to KZN to meet us and see Monica swim at the Seals Championship 2014.  He wants to be involved with Monica’s coaching.  Unfortunately, he is based in Johannesburg and it does not solve our problem as far as a local club and coach is concerned.

June 2014: We register Monica with Seagulls swimming club as a level 1 swimmer.  The club does not register level 0 swimmers at that point in time.   We arrange with the Coach from Johannesburg that he assist with training programs (instead of paying for coaching fees, we pay for the programs) and Coach Jan does the coaching during off-peak hours at the gym in Toti.

In 2015 and 2016 we decided that what we do is working and Coach Jan completes the ASCA swim coaching qualifications in order to learn more and do what we do better.

Does Amanzimtoti have a club and coach now?

Several swim clubs and swim schools open in Amanzimtoti in 2017.  Our attempts between December 2013 – 2017 to secure a pool in order to start a club were not successful.  We also decide to just focus on Monica and keep her in the water, swimming at all cost.

Monica started swimming for health reasons.  She is becoming stronger every year.  We see how she views training and eating healthily as a lifestyle and not just a sport.

Yes, as some well-known coaches said: “You know you are doing the hardest thing there is to do…..coach your own kid…”  – we do not mind.

We will battle through it all and do it all over again – for Monica. She just wants to be a swimmer. 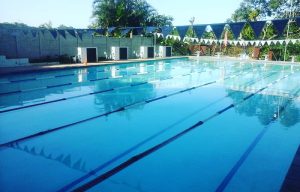 New beginnings for Coach Jan and Monica in 2018:

May 2018:  Aqua Lifestyle Centre in Amanzimtoti contact Coach Jan to ask if he is willing to join the club as their swim coach.  Privately owned, heated pool, starting blocks – what more can anybody ask for? This is a dream come true.

Monica continues to swim for North Coast Dolphins swim team but has a squad to train with.  Coach Jan continues to coach her with the new squad.